Tamil Poets against casteism and racism 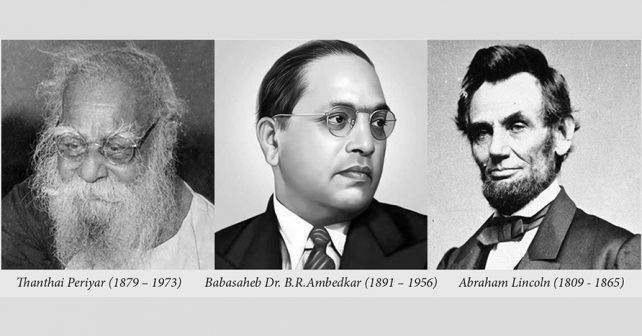 Karthick Ram Manoharan, a scholar engaged in socio-political analysis with special reference to Tamil Nadu clearly states in his essay titled “In the path of Ambedkar: Periyar and the Dalit question” clearly states:

“Periyar’s works reveal that he placed Dalit liberation as an important element of the Dravidian project. Acknowledging his indebtedness to Ambedkar, Periyar was uncompromising in attacking the graded system of caste hierarchy and difference and discouraged accommodation within the system through ‘sanskritization’. In cases of conflict between intermediate castes and the Dalits, he stood on the side of the latter. Addressing caste divisions within the non-Brahmin bloc, he advocated both secular and religious forms of Dalit militancy.”

His article provides a systematic account of Periyar’s approach to the Dalit question, substantially focusing on his engagement with Ambedkar. It uses Periyar’s primary works to demonstrate the centrality of Dalit empowerment and liberation in Periyar’s political thought. It concludes with a discussion of his responses to anti-Dalit incidents in his lifetime, where he clearly sides with the Dalits against powerful intermediate castes.

“It is Periyar’s ideas, actions and most importantly his overall grammar of protest that, in my view, can most effectively take on the forces of Hindutva today. The Dravidian movement itself offers an excellent model to the rest of India to combat the barbarism of the caste system, redistribute resources, empower women and establish a society where reason and democracy prevail over the dictatorial urges of a tiny minority of upper caste Hindus.”

Periyar was a legend in his lifetime and an emancipator of a great significance. He can be compared to Mahatma Phule or Rajaram Mohan Roy, and deserves a very important place in the annals of Indian history. He was a Rajaram Mohan Roy in social reforms, an Ambedkar in the uplift of Dalits (the Oppressed), an Ingersoll in atheism, a Bertrand Russell in rational approach and a Mao in mass appeal and organizing skills.

Bharatidasan was an ardent follower of Periyar’s ideology. To avoid elaboration, we can simply describe Bharatidasan as a literary counterpart of Periyar E.V.R. Among the modern Tamil poets of the post-independence period (i.e. after 1947) most of them come under the Bharatidasan School. Here in this short essay I wish to quote some poems to illustrate the dedication of the poets who belong to Bharatidasan school, in their war on the evil of casteism.

The Poet’s identification with Dalits gives a keen insight to appeal for a social change. Inkulab becomes ferocious when he thinks of the inhuman and horrible cruelty committed to Dalits. Whenever he writes about Dalits, he himself turns as a Dalit. Identifying himself with Dalits, he speaks:

The Blood drops
Oozed from our
buttocks and
thumbs Are frozen
in the Ithihaasas
Which you recite
daily.
Even when Ahimsa was preached
Under the
Bodhi tree The
fire which was
burning us
Never stopped.
We were suffering for
many a Thousand years
With the legs which did
iron chains tie And the
mouths which drank the
cow-dung. We were
carrying the scorching sun
On our back daily.
With the fibers of
our perspiration We
clothed the nudity of
the earth.
Even then
We gained a small
measure of rice And
a piece of loincloth
When we were born
in this earth The
thread of ‘caste’
made by you
Entangled our neck
Even before the placenta of the mother’s womb
We are-
Indian
Blacks,
The wealth of the Whites flourished
By the blood of the Blacks
Like that
Your temples and Tajmahals
Were built and cherished by our blood.

The title of the poem ‘Fiery Position’ explains that the Dalits, who had tolerated the savageries done to them for many centuries, had taken a determined standpoint.

Poet Arivumathi who belong to Bharatidasan School, still fight for the liberation of the Dalits from the clutches of Untouchability and ostracism, still carried on by the orthodox Hindus, even at this age of Democratic awareness. Poet Arivumathi shows the way of non-cooperation and non-violence as the methods to protest. Provocation may lead to turmoil thereby accelerating violence and mass-hysteria which always results in mass killing. The poet should be a responsible person. He should never incite violence. Arivumathi is a responsible writer and in his poems always plead for a united struggle in a non-violent way. He describes Dalits as ‘Children of fire’. In a poem titled “Children of fire” he echoes the voice of Dalits.

If you beat
us Wemay
bleed…..
But we won’t shed tears
If you kick
us We won’t
weep
We will shout slogans
If you put us in prisons
We may be
imprisoned But
not our
principles
If you kill us…
We may die
But not our ideology

The ‘Sunrise’ is traditionally used as a symbol to denote the dawn of a new era. But for the poet, Abdul Rahman sees it in a different angle. In his poem titled ‘The Witness’ the poet gives the picture of sunrise employing expressionism. Every sunrise brings sad news and bad happenings in this globe. Genocide, cold-blooded murder of political leaders, gruesome murders due to the acts of terrorism and many ugly things are brought to our attention by the media in every morning.

So sunrise cannot be taken as a symbol of new era.

This poet also sees the sunrise as a murder.

White-dotted
Black is
Murdered by the White.
In the green-colored
Tongues of
The earth
Droplets of blood
Which try to
Transform as Words.

In colonial and pre-colonial India slaves were put dots over their body. The Night is described as a black and the stars look like dots put in the body of the slave. The sunlight of the dawn is described as the White. Appearance of the sunlight automatically removes the darkness of the night. It makes the poet to describe the morning scene as a murder of the Blacks. This poem was written during the struggle of the Blacks in South Africa. Through this poem the poet conveys his sympathy to the struggle of the Blacks and at the same time gives a different picture of the sunrise, which no other poet has imagined.

This poem by Vaa.Mu. Sethuraman, greeting Obama for his grand success in 2008 elections is an example for the Tamil poets expectation for the end of racist war. The poet is highly confident that Obama will bring a big change, winning over the challenges before him.

Victory of Obama will bring a change in the world!
Time changes, changes Time
Can anybody prevent the change of Time?
The Mighty Nature proves its strength
Nobody can prevent its force
Sometimes Time acts like a dreadful venom
Surprisingly it acts as divine ambrosia for us;
The almighty has now given ambrosia
for us’ Impossible’ has been made
possible by Obama!
America is a land of immigrants
Among the hundreds of ethnic groups
African-Americans only suffered a lot
Slavery and misery were the gifts for them
Tolerance and starvation were
their assets Abraham Lincoln
laid a foundation Barrack
Obama reached the peak!

Poet Vaa.Mu.Se. saw the victory of Obama as an end to racist violence. He is over-joyed as he concludes there will not be any atrocity committed in the name of race, color or creed.

Ponnadiyan as a disciple of Bharatidasan is wedded to his progressive policies and his poems propagate lofty ideals of Periyar E.V.R. His force and commitment can be seen in the following poem titled as ‘Please throw away.’

In a country where self-respect is not maintained due to poverty and greed, Ponnadiyan wishes to give useful advice to the younger generation to keep their dignity and maintain self-respect.

We want a change in the societal set-up as well as a change in everybody’s mind. Which should precede the other?