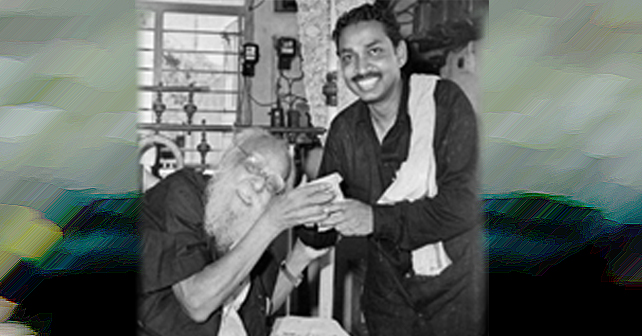 It was the year 1943, a mammoth conference of Dravidar Kazhagam was convened at Tirupapuliyur. Many stalwarts, well learned and articulate, addressed the conference. All of a sudden, a boy of ten was lifted and made to stand on a table and deliver his address. To the amazement of the audience, the boy spoke fearlessly and meaningfully, waving both his hands and made everybody take note of him. Naturally, when the torrent stopped, there was silence for a few seconds. Only for a few seconds, which was followed by thunderous applause.

The boy was K.Veeramani who was going to dedicate his entire life for addressing meetings, and writing books and articles for a noble cause. Soon, he was taken to meet Periyar. A.P.Janarthnam, a speaker and writer of Self-Respect Movement introduced the boy to Periyar as a speaker. The boy was simultaneously attracted by the majestic stature of the bearded lion in human form. The lion made the boy sit near himself and spoke to him affectionately. Neither of them might have thought at that time that the bond struck between them was going to be permanent, shaking social strongholds and shaping the society.

The ten year old Veeramani established that he was a fullfledged platform orator when he was asked to preside over a meeting at that young age. And he conducted the meeting as any veteran would. He continued to speak in conferences and wedding ceremonies, and has not stopped yet. The credit for making Veeramani a speaker, or, to be more exact, the credit for bringing out the speaker in him, goes to Dravidamani, the primary teacher who made it a point to encourage his pupils in various activities.

Even at that young age, Veeramani had taken a resolve to be a part of the Dravidian Movement and had thrown his lot with Periyar. Something extraordinary because at that young age, boys might go to speak in any function or meeting since it is too early to chalk out any policies. But this boy’s loyalty to Periyar remained in tact without shaking even a bit, during the turmoil of 1949, when many senior leaders went out to form the DMK. Not even for a moment he seems to have thought of leaving Periyar, not merely because of blind loyalty, but he felt very firmly that Periyar was right and there was no justification in the stand taken by the dissidents. There is yet another incident which shows the depth of his loyalty to Periyar.

Asiriyar’s modest family could not afford to offer higher education to his two elder brothers. But seeing his precocity, people advised him to pursue his studies. Learning of his difficulty, Anna, who was at that time the General Secretary of DMK, offered to help him in his education if he pursued his studies at Kanchipuram. What a tempting offer! But Asiriyar Veeramani declined the offer. He would reminisce later that he did not accept Anna’s offer because he had a fear that Anna’s proximity might create some vacillation in him.

He pursued his education at Annamalai University, doing his Intermediate course and following it up with a postgraduation in Economics, which course he passed creditably, standing first and getting coveted awards. But by no stretch of imagination could you called him studious. Far from it. He never overlooked the fact that he was part of the Dravidian Movement and a trusted lieutenant in Periyar’s army. Whenever Periyar came to that area Asiriyar would spend time with him and attend meetings. He would also be invited to speak in students’ forums in the university to enlighten them on political matters. He never failed to take part in the agitations fought for social causes, like the one against ceding of the Tamil territories to the neightbouring states, or one for restoring the name ‘Tamil Nadu’ to our state and so on. He was always admired by his professors for doing justice to his studies despite all these interruptions.

For an inveterate free thinker, Asiriyar’s loyalty to his master was everlasting But whenever he yielded to Periyar’s dictates, the latter would already have gone over all the aspects of the question and decided what was in the best interest of his disciple.

For example, within a short period after getting his M.A. degree he got a wire from Periyar to meet him at Trichy. When he went to his mentor’s residence, he showed the young Asiriyar to a man seated there and said “This is your mappillai, have good look at him.” Before Asiriyar could come out of his puzzlement, Periyar explained to him that he and Maniammai had decided to get him married. Not Asiriyar could complete his feeble protest, Periyar explained to him that the alliance would be in the interest of his disciple as well as the movement. Pat came the reply from the Asiriyar, “Whatever you do will be acceptable to me.” On another occasion when Asiriyar was practising law, Periyar asked him to take over as the editor of ‘Viduthalai’ Tamil daily. When Asiriyar said he would take it side by side with his law practice, Periyar insisted that the job required full time work and Asiriyar must give up his practice for good.

“After Peiyar’s demise, but for a short interregnum of five years when the party was guided by Annai Maniammaiyar as per the wishes of Periyar, Asiriyar was the natural choice as no one else had been as close to Periyar and as devoted to him and as dedicated to the cause as he had been. Once he had taken over he is working with a ‘sky is the limit’ policy in spreading Periyar’s message.”

That created a dilemma for the Asiriyar. His legal career was the sustaining factor of the family. If he gave it up, there were two courses open for him. One was to get his payment from the party for his editorial job. The other one was approaching his in-laws for financial support. Both were equally unacceptable. He mulled the matter over with his life partner and decided to receive support from his in-laws. That would be a slur on his honour no doubt, but receiving money from the party would be an act of sacrilege to him.

They say mystics dissolve their beings into the cosmic force. Asiriyar is not a mystic. But he is second to none in his devotion to his mentor. Hence he has dissolved his personality and made Periyar’s own. He deems it his life’s mission to take Periyar’s message to the masses.

Periyar asked him to take care of ‘Viduthalai’. But it so happened that all the papers issued  by Periyar, English and Tamil were tended by him as jealousy as a mother would take care of her child. He always accompanied Periyar in his tours and addressed the meetings preparing the audience for Periyar’s talk. He ensured that Periyar’s talks got full coverage in ‘Viduthalai’. Besides disseminating his message through columns, cartoons, titbits, scrolls and in any other manner he would think of.

After Peiyar’s demise, but for a short interregnum of five years when the party was guided by Annai Maniammaiyar as per the wishes of Periyar, Asiriyar was the natural choice as no one else had been as close to Periyar and as devoted to him and as dedicated to the cause as he had been. Once he had taken over, he has been working with a ‘sky is the limit’ policy in spreading Periyar’s message.

The Justice Party and later Periyar’s Self Respect Movement had been advocating a policy of reservation for backward classes in the educational institutions as well as employment opportunities. Asiriyar has been giving prime importance to the policy as that is the sure way to social justice. He has been supporting the governments that supported the policy and fighting the governments which have not been supportive of it. All the policies which have been receiving Periyar’s attention are propagated by Asiriyar as vigorously as Periyar used to.

Another remarkable characteristic of Asiriyar is his indefatigable zeal. He is constantly on tour programmes all our Tamil Nadu and often outside too. He conducts conferences, meetings, seminars, discussions and camps to take Periyar’s message to the nook and corner of the world.

Significantly he has started dozens of educational institutions, which, apart from imparting education as per the university curriculum, also do the utmost to promote scientific temper, belief in equality, and a craving to be of service the society in as many was as possible.

A unique project he has conceived is ‘Periyar World’, which is still in planning stage, which, when realized will present Periyar’s life mission and service in the form of eyecatching visuals. You need not undergo the tedium of reading books. It is all there, enabling you to imbibe all facts effortlessly in an interesting manner, as a tourist attraction. It looks as if after covering the entire globe, he may have a plan to take Periyar’s message to Mars and Venus. His energy seems to be inexhaustible; it is as though the more he works, the more energetic he becomes.

What is the prime force that moves him, guides him, encourages him and invigorates him? His devotion to his master, of course.

Batches of Dravidian students tour the Tamil districts, exposing priestly tomfoolery and religious superstition. We congratulate the students, who forsaking comfortable holidays, have undertaken a strenuous tour. They are the great messengers of Dravidian Renaissance. Their work in the past has been in vain. In the summer, the students’ tour was a great success. Especially in the interior parts, the message of Reason was received with gusto. There was a great awakening: Now, the second tour is in full swing. Trudging along foot paths, travelling jolting carts and crowded trains, braving the chill morning weather, taking irregular meals, lecturing to motley crowds on delicate problems, separated, perhaps for the first time from their parents, these young bombers drop the bombs of reason, which prove to deadly incendiaries to the orthodox and the renegades. That is a splendid collection of vibrant youngsters of varying age and study. Take for instance, young Veeramani barely eleven, thundering against caste and priest! College and high school students vie with each other in spreading the message.
Courtesy : The Justicite, Erode
– December 30, 1944.