The president of the book launch, Prof. A.R. Venkatachalapathy addresses. A. Kalaiyarasan, S. Narayanan, Padmini Swaminathan and M. Vijayabaskar are on the dias

Tamil Nadu erstwhile Madras State has been ruled by Dravidian political parties for more than half a century. Anna (endearing form of C.N. Annadurai) formed the ministry of Dravida Munnetra Kazhagam (DMK) in 1967 and that was followed by Kalaignar M. Karunanidhi, and that was dismissed by the Centre using Article 376 during the period of emergency.

In 1977 M.G. Ramachandran formed Anna Dravida Munnetra Kazhagam (ADMK) ministry and became chief minister. In ADMK ministry was also dismissed and the dismissed ADMK came to power again after the election held in 1980. Till his demise he continued as the chief minister till 1987. After the election held in 1987, Kalaignar M. Karunanidhi, formed the DMK ministry and that was also dismissed by the Centre even without the recommendation of the State Governor. From 1991 onwards either of the two Dravidian parties came to power DMK (1996-2001 and 2006-2011) and ADMK (1991-1996, 2011-2016 and 2016-2021) has ruled the State and at present both the Dravidian parties have sought the mandate of the people in the recently held elections for its Legislative Assembly and the counting of the vote has been announced on May 2, 2021. Whoever wins the election, it is definite of either of the Dravidian political parties with more probability for the DMK under be leadership of M.K. Stalin.

No other States has the political scenario as of Tamil Nadu. In other States regional parties have also contested and came to power but with the intermittent tenure of being ruled by the national political parties. Such a Dravidian political tradition has been founded by Dravidian Movement, nurtured by Periyar E.V. Ramasamy (1879-1973). The first Dravidian party rule was formed in 1920 by the South Indian Liberal Federation, popularly known as Justice Party during the British period under the diarchy system of governance. The distinct feature of the Dravidian movement is that patriarch Periyar EVR chose not to be a part of the electoral system or State power. The parental organisation viz. Dravidar Kazhagam was founded by Periyar in 1944 and it continues to serve the society as the core ideological propagandist. Only the Dravidian political parties like DMK, ADMK and MDMK have chosen the political path, contested elections, came to power alternatively with adherence to Dravidian principle of social justice and equality. Because of this organized functioning though both the parties are political opponents they are harmonious in the common Dravidian principles. By which the State of Tamil Nadu has been under a unique form of governance popularly known as ‘Dravidian Model’, The ‘Dravidian Model’ is a distinction – governance under which Tamil Nadu has progressed on many a front comparatively for its emulation by others.

The progress made by Tamil Nadu State under the Dravidian parties’ rule has been analysed by two research scholars – Prof. M. Vijayasankar and A. Kalaiyarasan Associate Professor of Madras Institute of Development Studies (MIDS) of Council of Social Science Research (CSSR), Chennai. The research outcomes have been compiled as book, ‘The Dravidian Model – Interpreting the Political Economy of Tamil Nadu’. The book launch function was held on 16th April 2021 at Music Academy Hall, Chennai. 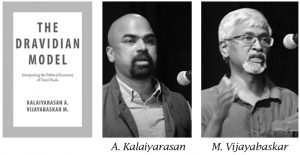 The launch was presided over by Prof. A.R. Venkatachalapathy of MIDS. The book was released by S. Narayanan, former bureaucrat in Indian Administrative Service and former member of the Prime Minister’s Economic Advisory Council along with Prof. Padmini Swaminathan, former Director, MIDS. Prof. S. Anandhi of MIDS received the first copy. Besides many scholars, educationalist-experts, journalist-experts addressed the launch through zoom. The excerpts from their speeches:

Dravidian voice started hearing even before the Dravidian parties came to power to rule Tamil Nadu. Anna, the founder of DMK when he entered Rajaya Sabha as its Member 1962, Dravidian voice was listened by the statesman of international order and the prime minister, Jawaharlal Nehru.

After the demise of Nehru in 1964, responsibility was discharged successfully by K. Kamaraj as the President of All India Congress Committee. Similarly on social reforms like abolition of widespread devadasi system by Dr. Muthulakshmi Reddy and abolition of untouchability by Thatchayini Velayutham were Dravidian voices raised at national level. Again the Dravidian voice has to be heard in Delhi for which Dravidian leaders have to strive.

N.Ram, Senior Journalist, ‘The Hindu’ Groups, remarked that on many parameters Tami Nadu is progressing with splendid performance. The industrial and service entrepreneurs – in other States is dominated by upper castes. The major difference in Tamil Nadu, is its predominance of backward classes due to the long journey of social justice, dispensed for more than 100 years. The negative aspect is alarming corrupt practices and that have to be curtailed by all means.

Dr. Jean Dreze, Honorary Professor, Delhi School of Economics, observed that “I had been in Tamil Nadu for many decades, observing the development and interacting with the beneficiaries. Under public health front, the performance made by Tamil Nadu is incomparable with any other States.

Such performance and position had been mentioned in our co-work with Prof. Amartya Sen for ‘Uncertain Glory’. Such healthcare base created, has been helpful to the state in combating the present COVID-19 pandemic, better compared to other States.”

Dr. P.G. Babu, Director, MIDS, said that, “the authors of the book have to be congratulated for their work which was not carried out so far through research study. MIDS feels proud of the hard work the scholars.”

Prof. A.R. Venkatachalapathi, MIDS, in his speech observed that, “The book ‘The Dravidian Model’ is a pioneering work on its content. When the attention of the Government is lacking on funding the social science research study, the authors have brought out the study. The work will pave way for many more such works in future.”

Prof. M. Vijayabaskar briefed about the contents of the book while commencing the launch. A. Kalaiyarasan, prior to proposing vote of thanks, clarified the doubts and on the opinions of the audience.

Though the study is related to Tamil Nadu, because of the publisher, Cambridge University Press, it is sure of its wide reach globally.