THE GLORY OF JUSTICE PARTY 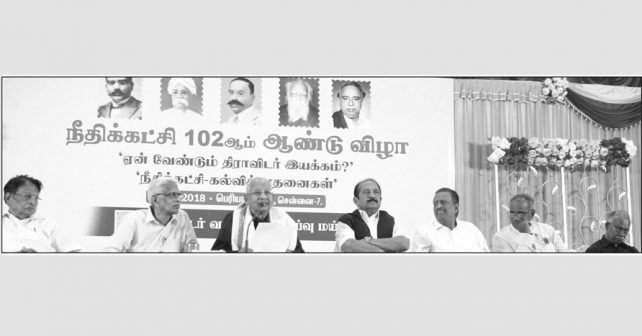 Dr. K. Veeramani addresses, VAIKO by the side after delivering the special address

Justice party, a non-brahmin organisation was the foundation of the Dravidian Movement.  Justice party got elected to rule the Madras Province under diarchy system in 1920, brought by Montague – Chelmsford reforms in British India.  Many social reform measures were initiated during the rule Justice Party.  In that count, it was pioneer to bring an exclusive Government Order (G.O.) for communal reservation which later transformed for the cause Social Justice for its adumbration in the Indian Constitution.

Dravidian Historical Research Centre organised a meeting at M. R. Radha Manram, Periyar Thidal on 20th November 2018 to mark the 102nd anniversary of the birth of Justice Party. Vaiko, the General Secretary of MDMK, made a thundering speech.  Excerpts from the speech:

It was on 20th November 1916 that the conference inaugurating the South Indian Liberal Federation, popularly known as Justice Party, took place in Victoria Hall, Chennai. It was attended by a good number of dignitaries belonging to different linguistic groups.  This Movement was started by people who came together transcending castes and religions.  When the party came to power it gave voting rights to women for the first time in India, even before the British gave franchise to women in their country.  Our Justice Party even overtook the British in that respect.

Justice rule permitted the oppressed classes, those who are called Dalits at present, to draw water from all public wells and to wear footwear while walking on the roads.  These were revolutionary steps in those days, crushing the Aryan citadel erected in the medieval period, which was responsible for such restrictions.

In those days bus tickets carried the words that the depressed classes must not travel is the buses.  It so happened that WPA Soundara Pandian of Justice Party was the President of the District Board.  In that capacity he set fire to all those tickets and passed an order that they could travel in the buses without any restriction. What Martin Luther King Jr accomplished in the United States through his bus boycott agitation Soundara Pandian accomplished using his authority. Crowning everything they did, Justice Party brought to an end the Devadasi system.

On 2nd August 1918, Dr. T.M. Nair of the Justice Party got the unique distinction of being the only person from the Indian subcontinent to have addressed the joint session of the House of Commons and the House of Lords of Great Britan.  An honour no one got, not even Mahatma Gandhi or Jawaharlal Nehru.  That is why Lord Chelmsford eulogised Dr. T.M. Nair as an “impressive and vigorous personality.”

Asiriyar K.Veeramani made an elaborate speech delving deep into the history of the Justice Party and comparing the incidents with the present day happenings.

Excerpts from the speech of Dr. K. Veeramani

Seeing Periyar’s continuous fight in the Congress Party for the cause of the backward and the downtrodden classes, Dr. T.M. Nair made this observation.  ‘E.V. Ramasamay Naicker is a dignified personality in Congress Party.  He is in the hope that once independence is attained by the Congress Party, social justice will prevail in all walks of life.  The time is not far off when he will come and join us.’

Once Periyar went to North India and addressed a meeting in Lucknow, and Raj Narayan, who later defeated Indira Gandhi presided over the meeting.  In the meeting Pulavar Imayavaramban and I were selling Periyar’s work “Ramayana – True Reading,” translated into English.  A middle aged woman, who had a glimpse into the book tore it into pieces and trampled it under her feet.  She came running towards the dais, shouting, “You should not speak about Rama and Sita. It is a sacred work.”

Raj Narayan jumped from the dais and ran towards the woman.  “He will speak.   You know where he is from?  You know his name?  He is Rama’s Swami – Ramasamy.  Do you know?  He will speak,” he said assertively.

Periyar spoke as usual.  His speech was translated into Hindi, to thunderous claps.  All the books with us were sold out. One Lalai Singh Yadav met Periyar where he was staying and asked for rights to publish the book in Hindi under the title “Sachi Ramayan”.  Periyar was immensely pleased.  “By all means I give you the right.”

When the book was published in Hindi the Congress government in Uttar Pradesh proscribed it.   The translator went to High Court opposing the ban. The High Court decreed that there should be no ban for expressing one’s views.  In its detailed judgment, the High Court of Allahabad, maintained that as per the constitutional provision of freedom of expression, Periyar had every right to express his views.   There are so many versions of Ramayana, one of which holds that Sita was Rama’s sister.  After extensively going into the Ramayana question, the High Court decreed that the ban on the book was unacceptable.

Yet, the government of Uttar Pradesh made an appeal to the Supreme Court.  They did so because it was the period of Emergency, Yet, there was a good turn, Justice V.R. Krishna Iyer being the judge who went into the appeal, underscored in his judgment the need for a thousand ideas being born in a democracy and upheld the judgment of the High Court.

Even the High Court of Allahabad and the Supreme Court could not do anything to the work which laid bare the trickeries of Ramayana.  If after all this there are people who are after building a temple for Rama.

What should we make out of them?”