The Kumbakonam of the Kanchi Shankaracharya 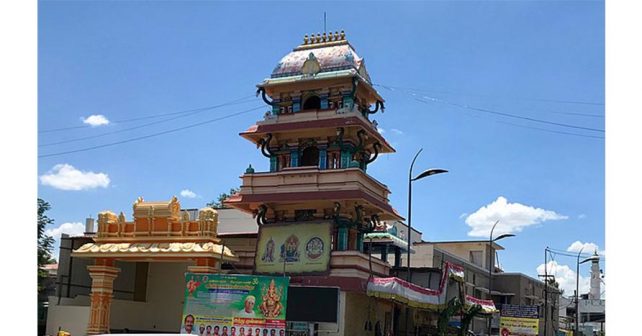 Few will deny that organised religion is an enterprise oiled by huge injections of cash. Apparently, as in politics, there is no good money or bad money when it comes to serving mankind? The Kanchi Kamakoti Peetham has been no exception to this. God’s work can often be very big business, and as is often in the case of big businesses, the distinction gets very blurred between institutional wealth and personal wealth.

A report by investigative journalist Damodaran Prakash in the Tamil weekly Nakkeeran, and the confession by the perpetrators, led to the arrest of the late Jayendra Saraswathy and Vijayendra Saraswathy, the present pontiff of the Kanchi mutt, for involvement in the murder of Sankararaman, the manager of the Varadaraja Perumal Temple in Kanchipuram. A former confidant of Chandrasekharendra Saraswathy, Jayendra’s predecessor, Sankararaman quit the mutt when Jayendra Saraswathy became its head. He then joined the Varadaraja Perumal temple as a manager. He was reputed to be a stickler of tradition and honesty, and had streamlined the assets and income of the temple.

He even suspended two of the temple priests when there was a robbery in the temple and refused to allow them until they made good the loss of Rs 1,05,000.

He made the tenants and land lessees of the temple settle long due arrears. A five man gang murdered Sankararaman on Septe-mber 3, 2004 in the premises of the temple using sharp weapons. Sankararaman also had a habit of publicly making accusations against the two Kanchi Shankaracharyas and their peccadilloes. They were immediately suspected of having a hand in the gristly murder and investigations led to their arrest.

Following the arrest of the Shankaracharya on November 11, 2004, former Prime Minister Atal Behari Vajpayee, former President R. Venkatraman and several leaders from different political parties held a protest in New Delhi condemning the arrest, while the then DMK party chief M. Karunanidhi welcomed the arrest. Vajpayee met Prime Minister Manmohan Singh and asked that Saraswathy be moved to “some decent guesthouse”. (At another time, he was similarly solicitous in the Bofors case of the Hinduja brothers.) The BJP and the Sangh Parivar, which had been waging a battle against the duo’s arrest with their “Hinduism under threat” slogan, failed to create any significant response. Ordinary Hindus seem to have a better idea of their seers.

The origins of the Kanchi Kamakoti Peetham is like the cooked-up genealogy of Chatrapati Shivaji by Pandit Gagabhat in Banaras, when Pune’s Chitpawan priesthood refused to anoint Shivaji as the Chatrapati taking the specious plea that he was not born a Kshatriya. The obliging Gagabhat pocketed a lakh of rupees to give Shivaji an extravagant genealogy that he was descended from the Chauhan kings of Kannauj. The Kanchi Peetham’s genealogy too apparently was constructed with the same regard to veracity.

According to the Kanchi Mutt, it was founded in 482 BC, or 2,486 years ago, by Adi Shankaracharya who spent his last years there and thereby established the fifth Peetham. This flies against all known history. First of all, Adi Shankaracharya lived in the eighth and ninth century AD. Then, it is widely accepted that he had established four Peethams, or seats of learning, one for each Veda. These four Peethams are at Sringeri, Puri, Dwarka and Badrinath. Not being satisfied with rewriting history by extending it by over a millennium and a half, the Kanchi Mutt also arrogates to itself a supremacy over the four original Peethams. It also seeks to rewrite a more important aspect of Adi Shankaracharya’s life by insisting that he died at Kanchi and not in Kashmir. For some time, the Kanchi Mutt even tried to pass off quite obviously a recently constructed mandapam as the “Shankaracharya Samadhi”. When this was pointed out to them, they quickly renamed it the “Shankaracharya Sannadhi”. By jettisoning the “m” for a pair of “n”, the mutt then turned a putative tomb into a sanctum. Thus, a tomb without a body was turned into a sanctum without any sanctity!

The previous Shankaracharya, the venerated Chandrasekharendra Saraswathy, was the first of the big league Shankaracharyas, who took over a decrepit mutt in Kumbakonam and turned it into a religious powerhouse.

The Kumbakonam Mutt was established in 1821 by the Maratha king of Tanjore, Pratap Singh Tuljaji, as a branch of the Sringeri Mutt. It became a separate institution when Tanjore and the Wodeyars of Mysore went to war against each other. It is on record that in 1839 the Kumbakonam Mutt applied for permission to the English Collector of Arcot to perform the “kumbhabhishekham” of the Kamakshi temple in Kanchipuram.

Thus, the Kanchi Mutt can at best claim its origin to be in 1842. My own ancestral village, Nagavedu, is a few miles from Kanchipuram. I remember my father telling me that his father was a young man when the Kanchi Shankaracharya set up shop in Kanchipuram at the turn of the last century.

He also said that his father always referred, and as did others in the area, to this new Shankaracharya as the Kumbakonam Shankaracharya. This is a nice play on the word Kumbakonam for in colloquial Tamil it is also used to refer to a shady deal, which is better expressed in Hindi as a “gol maal”. My friend Suneet Aiyar, the wife of former petroleum minister Mani Shankar Aiyar, owned a shop in New Delhi selling South Indian artifacts and it was called “Kumbakonam Arts”. She being a sardarni didn’t probably understand the implicit irony of running a business called Kumbakonam. But then neither would Mani, whose Tamil might at best be as good as S. Gurumurthy’s Hindi!

Another well-known Aiyar and a more serious one at that, the late Sir C.P. Ramaswamy Aiyar, who headed a Central Commission on Hindu Religious and Charitable Endowments, categorically stated, “There is no such thing as the Kanchi Kamakoti Peetham.”

Even the Supreme Court has held that there are only four peethams established by the Adi Shankaracharya, and the claims of a fifth one in existence are without any basis. Apparently, that too was not enough for even the highest in the land to continue believing the Kumbakonam Shankar-acharya to be the primus inter pares amongst Shankaracharyas. Such is the stuff that belief is made up of.