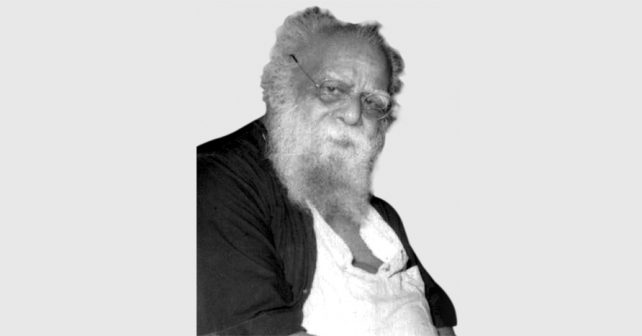 All that we require is self respect.  We must free ourselves from our ignominy. Only after that we can move ahead. Do you know every human has his rights? His rights constitute his power.  Every human can live for five hundred years.  They MUST. But at present we cannot even think of it. Now we have got only an average life of 52 years. I am now 95.  May be in the whole country there may be ten more people of 100 or so years.

We are able to live this long only after the arrival of the British.  Before that, at the advent of the British rule, our average lifespan was not even 10, it was only 7 or nearabouts. Only after the British rule was established, with the Western medicine, hospitals, health and hygiene being passed on to us we have an average life of 50 years.  The Westerners have about 75. Russians have nearly 100 years. Even we will reach 75 years in another decade or two.  By the time the Westerners would have reached an average of 120 years.

If days go by our life span will go up to 500 years. What more can we ask for? Living will not be a difficult job. Only dying will be. So many facilities have been made available in our country. Yet, we do not have much to claim an our own, because we still remain sons of prostitutes.  (that is, sudras)

From the beginning till date we have been sincerely following these polices. The Brahmins themselves have done away with Gandhi.  Before we even started, Brahmins have got rid of him.  Gandhi started listening to us and started turning to our way of thinking. They asked Gandhi why do you still speak of god?  Gandhi said there was no connection between god and Congress.  Within thirty days of making this utterance, Gandhi was done away with.

They said, “This man (Gandhi’s) has become (E.V.) Ramasami.  Ramasami has no one to turn to.  But Gandhi is the greatest man of India.  If he says something, everybody will start believing in it.”  And they got rid of him in no time.

Next, we said Congress must disappear from the scene.   And Congress has already met with its end.  It will never regain the former shape.  Already there are two factions hanging on to it, after having divided itself. Now they are unabashedly talking of unity.  Even if they get united, will they attain the same stature?  What can they achieve?  Who will support Congress hereafter, except there who expect crumbs?

People will ask what is the policy of the Congress.  Take Kamaraj, can he ever speak of eradication of castes?  If he ever speaks like that he cannot remain in Congress.  The very aim of Congress is protection of caste system.  In the beginning Congress was started by Brahmins.  They used it for their own advancement.  Anyone who joins the party will have to subscribe to the policy.  Since Kamaraj was in our company he was able to do a few noteworthy things.  Will Bhaktavatsalam ever raise his voice against caste system?  Will Subramaniam do that?  If they do, they cannot remain in Congress.  That is the Congress programme: protection of caste system.  Can the party ever regain its position?

Even if the Dravida Munnetra Kazhagam rule were to end, the place would be taken over only by a reformist party which is opposed to Congress and caste system.  Gandhi is no more.  Congress has met with its end.  Even god has been made a laughing stock.

Did Veeramani not tell you – god was beaten with slippers. What happened on account of it? There was a hectic propaganda saying, “They have beaten god with slippers, do not vote for them.” Even Kamaraj indulged in the propaganda.

What happened?  A record number of those candidates have been elected, exceeding 200. 184 DMK candidates and 20 from the supporting parties.

Congress, Gandhi, god and so many other factors, all joining together could not get beyond number 20.

Those  who blame us as anti-god are those who have stopped thinking.  Let them see that more than 200 of our candidates have got elected. It shows that people are getting enlightened. We should make use of such enlightened people.  We must educate people.  A lot of people are yet steeped in ignorance.

It is essential that we must come up.  Those who are in the pit, must come to the level ground.  Now we are in the pit relegated to the fourth and fifth place among castes, as untouchables, and as sons of concubines. This system must change, and we can advance only after that.  Without changing the system we can never come up.

Nobody in our country took note of such bemeaning conditions.  But we did not rest in peace.  We have been doing something or other for changing the condition.  And day after day the change was perceptible.  There is still a lot to change.  As it is, no one else can do it.  No other party is interested in this task. They are afraid of losing votes if they join with us.  But they are not worried about losing their self respect.

That is why we conducted the conference.  Veeramani explained to you the reason for our conducting it. The Constitution proclaims untouchability is eradicated.  It is emphatic that untouchability should not be practised in any form.  But it protects religious freedom. That condition is hampering our task. If religion had not been protected in the Constitution we would have been able to do a lot of things for our welfare. We caused an Act passed permitting people of all castes to become archakars. But it had been nullified by the court. It shows that any reform that is opposed to sastras cannot be undertaken hareafter. We are relegated to our dishonorable existence.

But the Constitution makers have protected themselves. They have divided the country into 15 or 16 States so that people would not get united.  Each State can take care of itself without any help from the other states. People in each of the 16 States live in isolation without having any connection with the others.  Since the languages are different, communication between people of States is not possible. The Constitution makers have effectively prevented people speaking one language mingling with people speaking other languages.

We are intent upon eradicating the position of sudras. Are there sudras only in Tamil Nadu?  In Tamil Nadu alone, out of four and a half crores of people, about 3 crores are sudras. Muslims and Christians put together might make only less than 10 lakhs of populations (Muslims forming 6 lakhs and Christians about 3 lakhs) Brahmins may make only about two to three lakhs.  All the others are sudras.  We cannot even imagine such a large chunk of society living in dishonorable condition.

Hence it must be changed. It is a herculean task.  Still we have to try.  It will be a formidable endeavour. Why?  We need a Constitution for running a government.  Agreed, and you need people to run the government.

People who are running the government in our country take care that we do not get united, the tethers that bind us should not be loosened, and we must eternally remain in servility.  Only if servility continues three per cent of people can rule over 97 per cent.  The entire dispensation is meant for that. We the Self Respect Movement are the only people who are concerned about it and are impatient to bring about the required change.

No other parties supported yesterday’s conference. They could have supported.  Each party could have offered as much of support as they could. But the government at the Centre was vigilant. They were watchful of people attending the conference. That is why no one from other independent parties attended our conference. No minister, no party member, or no individual attended the conference. All those who were subjected to the shame we are fighting to remove must have attended it, and offered their support and assistance.  They did not do so.

It is only we who are launching the fight.  We are alone.  Our task is essential.  We have to bring about a change.  It we cannot bring it about, we must lay down our lives. Only those who are sensitive and awakened will be with us. Those who are selfish, who cannot look beyond their own interest, will not join us.

They have been successfully divided and indoctrinated by ours opponents.  You have to think about all this.

AN IMPORTANT POINT TO BE TAKEN NOTE OF:

Thanthai Periyar used to express his thoughts through his speeches and writings on various occasions, carefully weighing the situations prevailing at the time, the organization where he spoke and the type of audience. For superficial readers the ideas may look self-contradictory. But that is not correct. We have given here all his ideas on rationality without adding or subtracting anything. That is intellectual honesty, isn’t it?

There are a few bitter outpourings. Instead of taking them as bitter feeling against certain parties, organizations or leaders, it will be more appropriate to understand his deep commitment to his principles.  The methodology of expression is only a policy.  For any movement principles are steadfast and not deviations but policy would and could be so as situations and circumstances demand. Periyar’s involvement and dedication towards the eradication of religion, caste and untouchability were responsible for the eruption of volcanoes on those occasions. We consider it our duty to enjoin the future researchers, in the interest of truth, not to quote such passages out of context.