The Madras Presidency in 1940’s and the then Affairs 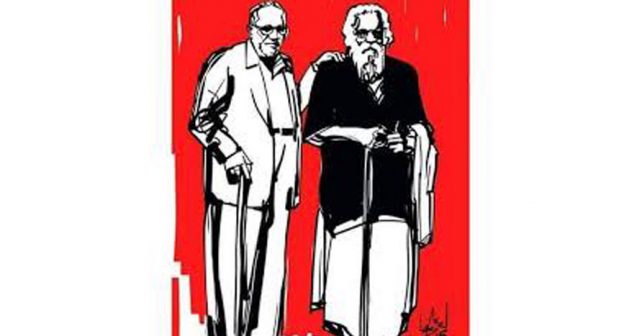 As soon as the Congress came into power 1937, it dissolved the School Committees which contained a majority of non-Brahmins and appointed fresh school committees with Brahmins in majority.

It manipulated and maneuvered District Board elections, postponed them or hastened them as it suited their purpose of getting a majority of Brahmins returned. It disqualified hundreds of voters on the slightest pretext and entire villages were thus deprived of the right to the vote. It introduced the literacy qualification for franchise and thus—because 90 per cent of the Brahmins are literate and 93 per cent of the Non-Brahmins illiterate—increased the voting strength of the Brahmins and decreased that of the non-Brahmins.

And in order that education might be confined to Brahmins only, declared the Speaker, the Government completely and entirely closed down as many as 2,200 village schools on the plea that Government had no money for maintaining them.

While they had no money for these schools, twelve lakhs of rupees were granted for starting a Brahminical College for the study of Vedas, Puranas, etc., meant exclusively for the Brahmins in the beginning and employed some forty to fifty men, all Brahmins on salaries ranging from Rs. 200 to 600.

Ninety per cent of the medical men are Brahmins, 90 per cent of the lawyers Brahmins. Under Government rules non-Brahmins would have to get representations in Government’s legal appointments. Government issued a most extraordinary and outrageous order leaving it to the various district court bars to elect public prosecutors. And since these bars are dominated by Brahmins all the police and public prosecutors except one were Brahmins.

Brahminism in Madras, said Mr. Naickar, had gone mad to such an extent that Government actually issued an order forbidding the goldsmiths of the province who aspired to be Brahmins from describing themselves so and using Brahmin surnames. The order further instructed district and other courts and revenue offices that no communications received from goldsmiths with Brahmin surnames should be registered, acknowledged or taken cognisance of. It was rescinded only after a terrific campaign.

In the nation-building departments the Government had a shameful record. It closed down schools… two thousand of them cut down grants for scholarships for non-Brahmins. Depressed Classes and Muslims, and, in fact, did everything to turn the masses into hewers of wood and drawers of water to be exploited and ruled over by the all-wise Brahmin.

The press was controlled by the Brahmins so that it was impossible to get non-Brahmin grievances redressed, and their activities reported.

The Congress promised everything to everybody. During its election campaign there is no falsehoods too mean to be indulged in, no promise too hypocritical. Landlords were told that all land revenue would be abolished, tenants were told that all rents would go by the board, merchants were promised goods free of duty, famine stricken areas were assured of rain through the favour of Gandhiji who was in direct communication with Varuna, God of Rain, districts stricken with epidemic were given hopes of escape from the calamity if they voted Congress……

Justicite Leader to Sail in same Boat with Jinnah and Ambedkar

Plans for the formation of an anti-Congress front are being vigorously canvassed by Mr. E. V. Ramaswami Naicker, leader of the Justice Party in Madras who has been in Bombay for the last five days.

To a city which has recently been regaled with stories of “atrocities” committed by the Congress against Muslims, Mr. Naicker is trying to infuse the virus of a disease which had been troubling Madras for some time–Brahmanophobia but from which this province has been free to a considerable extent.

Mr. Naicker is the leader of the Justice Party of Madras which counted among its leading lights men such as Sir Shanmukham Chetty, the present Dewan of Cochin, Sir A. Ramaswami Mudaliar, Commerce Member to the Government of India, Sir K. V. Reddi, who was for some time the Acting Governor of Madras and Premier of the interim Cabinet and the Raja of Bobbili. In the 1937 elections the Justice Party was swept off the field by the people, an overwhelming majority of whom are non-Brahmins, but who were sick of the antics of the party. With the eclipse of the party the big leaders gave up leadership of the party and passed on to more truthful pastures. This has brought up Mr. Naicker to the leadership of Justicites.

Out To “Smash Congress”

Mr. Naicker used the anti-Hindi agitation in Madras to come into limelight and now that the Congress Ministry is out of power, he is trying to use the opportunity to resuscitate the Justice party and “Smash the Congress.” And in this task, he is trying to seek the help of Mr. M. A. Jinnah and Dr. B. R. Ambedkar.

Mr. Naicker had lengthy talks with Mr. M. A. Jinnah and Dr. Ambedkar in the course of which he is understood to have narrated to them, with the help of an interpreter, the alleged acts of oppression against the non-Brahmins. He is also understood to have explained that theirs was not a minority question in Madras. The non-Brahmins who formed about 97 per cent of the population were being subjected to the tyranny of the small Brahmin minority which was completely controlling the Congress policy in the province. Since the Muslim League and the Depressed Classes were also fighting against the same organisation, he suggested that they should make common cause.

Mr. Naicker’s disapproval of the Constituent Assembly plan is understood to have evoked the sympathy and support of the League leader.

Dr. B. R. Ambedkar, leader of the All-India Scheduled Castes Federation addressed a large gathering this evening for over 100 minutes, strongly defending the Viceroy’s declaration of the community’s position in the national life of India and defining the attitude of the community to the future.

Drawing the analogy of Ireland, Dr. Ambedkar wanted to tell his Hindu brethren that he had a thousand excuses to adopt the attitude that Sir Edward Carson had adopted, and say “Damn your safeguards”. They had realised the interests of the country as a whole and promised to support any demand for home rule, with only a small condition attached to it, namely, reasonable safeguard for them.

“I would like to ask Mr. Sastri and Mr. Gandhi whether our attitude is not patriotic, noble-minded and generous. How much we are forgetting the Brahmanic rule under which we have been suffering for the last 2,000 years in the hope that we are getting safeguards and that we may, with the help of other generous elements in country, be able to build up a system under which not only this country will grow to the fullest nationhood but we shall grow to the full manhood?” he said.

“I would tell my Hindu brethren they had better revise the mentality, and they have to take into account the sacrifices we are prepared to make. Let us come to terms and settle this question.”

Dr. Ambedkar then referred to the Gandhi-Jinnah talks and said that the communal problem was not merely a problem between Hindus and Muslims, but it involved Scheduled Castes, Christians and other minorities as well. In a matter of such nature, he felt the wisest and safest course was for all representatives of different minorities to get together and arrive at some agreement. It appeared to him that any deal between two men would be to rob the third man.

If Mr. Gandhi gave Mr. Jinnah something more than he was entitled to that something would, he was afraid, come out of his (Ambedkar’s) share.

It is understood that Dr. Ambedkar and Mr. E. V. Ramasami Naicker, leader of the Dravidan Federation, had a long discussion on Sunday over the question of Dravidastan, the resolutions passed at the Salem Conference of the Federation and ‘self-respect movement in the province’.—Associated Press.

Courtesy: Source Material on Dr. Babasaheb Ambedkar and The Movement of Untouchables, published by the Publication Division, Government of Maharashtra