The North Vs The South 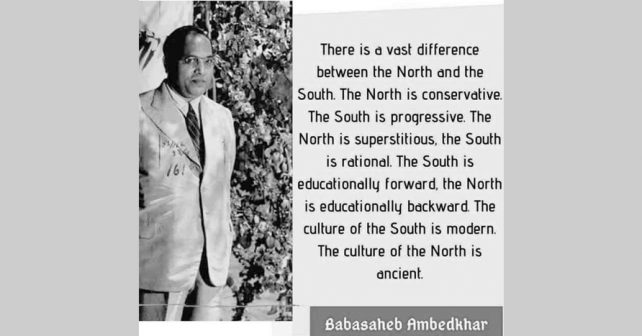 What the State Reorganisation Commission has created is not a mere disparity between the States by leaving U.P. and Bihar as they are, by adding to them a new and a bigger Madhya Pradesh with Rajasthan it creates a new problem of North versus South.

The North is Hindi speaking.  The South is non-Hindi speaking.  Most people do not know what is the size of the Hindi-speaking population.  It is as much as 48 per cent of the total population of India.  Fixing one’s eye on this fact one cannot fail to say that the Commission’s effort will result in the consolidation of the North and the balkanization of the South.

Can the South tolerate the dominance of the North?

It may now not be a breach of a secret if I revealed to the public what happened in the Congress Party meeting when the Draft Constitution of India was being considered, on the issue of adopting Hindi as the national language.  There was no article which proved more controversial the Article 115 which deals with the question. No article produced more opposition. No article, more heat. After a prolonged discussion when the question was put, the vote was 78 against 78.  The tie could not be resolved.  After a long time when the question was put to the Party meeting the result was 77 against 78 for Hindi.  Hindi won its place as a national language by one vote.  I am stating these facts from my personal knowledge.  As Chairman of the Drafting Committee I had naturally entry to the Congress Party enclosure.

These facts reveal how much the South dislikes the North. This dislike may grow into hatred if the North remains consolidated and the South becomes disintegrated and if the North continues to exercise a disproportionate influence on the politics of India.

To allow one State to have such preponderating influence in the Centre is a dangerous thing.

Mr. Pannikar has referred to this aspect of the case.  In his dissenting minute he says:

“The consequence of the present imbalance, caused by the denial of the federal principal of equality of units, has been to create feelings of distrust and resentment in all the States outside Uttar Pradesh. Not only in the Southern States but also in the Punjab, Bengal and elsewhere the view was generally expressed before the Commission that the present structure of government led to the dominance of Uttar Pradesh in all-India matters. The existence of this feeling will hardly be denied by anyone. That it will be a danger to our unity, if such feelings are allowed to exist and remedies are not sought and found now, will also not be denied.”

Did not Prime Minister Nehru on the 15th of August 1947 sit at the Yajna performed by the Brahmins of Benares to celebrate the event of a Brahmin becoming the first Prime Minister of free and independent India and wear the Raja Danda given to him by these Brahmins and drink the water of the Ganges brought by them?

How many women have been forced to go San in recent days and immolate themselves on the funeral pyre of their dead husbands.  Did not the President recently go to Benares and worship the Brahmins, washed their toes and drank the water?

The North still has its Satis, its Nanga Sadhus.  What havoc the Nanga Sadhus made at the last Hardwar Fair!  Did anyone in U.P. protest against it? How can the rule of the North be tolerated by the South? Already there signs of the South wanting to break away from the North.

Mr. Rajagopalachari has made a statement on the recommendations of the States Reorganization Commission which has appeared in The Times of India of the 27th November, 1955.  This is what he says:

“If it is impossible to put the State Recorganization Schemes in cold storage for the next 15 years, the only alternative is for the Centre to govern India as a unitary state and deal with district officers and district boards directly, with regional commissioners’ supervision.

“It would be utterly wrong to fritter away national energy in dispute over boundaries and divisions conceived in the drawing room and not on the background of conditions that have resulted historically.

“Apart from the general convictions of mine, I feel that a large southern State is absolutely essential for preserving the political significance of that part of the country. To cut the South up into Tamil. Malayalam and other small States will result only in complete insignificance of everybody and, in the net result.  India as a whole will be the poorer.”

Mr. Rajagopalachari has not expressed himself fully.  He did do so fully and openly to me when he was the Head of the State and I was the Law Minister in charge of drafting the constitution.  I went to Mr. Rajagopalachari for my usual interview which was the practice of the day.  At one such interview Mr. Rajagopalachari, referring to the sort of constitution which the Constituent Assembly was making, said to me, “You are committing a great mistake.  One federation for the whole of India with equal representation for all areas will not work.  In such a federation the Prime Minister and President of India will always be from the Hindi speaking area.  You should have two Federations, one Federation of the North and the South with three subjects for the Confederation to legislate upon and equal representation for both the federation.”

In creating this consolidation of the North and balkanization of the South the Commission did not realize that they were dealing with a political and not a merely linguistic problem.

It would be most unstatemanlike not to take steps right now to prevent such a thing happening.  What is the remedy?

Writings and Speeches, Volume – I,
Published by The Education Department, Government of Maharashtra, 1990