The truth about RSS 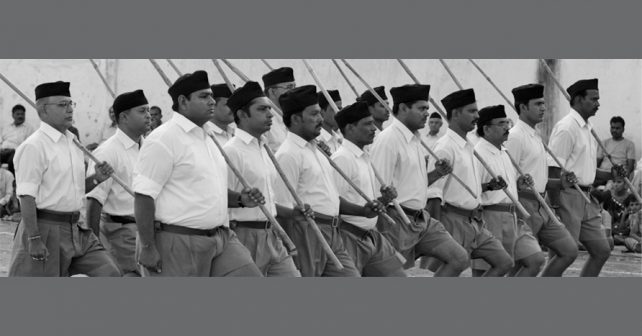 Gandhi’s wariness of RSS’ ideology is clear from his writings, historical record

There are continuous attempts from the RSS camp to show that Mahatma Gandhi looked to up to the RSS with respect. The latest such attempt is the article by RSS joint general secretary Manmohan Vaidya. (‘The Mahatma and the Sangh’, IE, April 12). Vaidya first tries to dissociate from Nathuram Godse by stating that in the many discussions he has attended on Gandhi within the Sangh, Godse is not mentioned. Does that mean Godse had nothing to do with the RSS?

Godse was a pracharak of the RSS who later joined Hindu Mahasabha as the secretary of Pune branch. His younger brother and a co-conspirator in the assassination plot, Gopal Godse in 1994 disclosed that his elder brother was anxious to protect the RSS, which had been “like a family to us”. “[Nathuram] said in his statement that he left the RSS,” Gopal continued, “He said it because… the RSS were in a lot of trouble after the murder of Gandhi. But he did not leave the RSS”. Gopal denounced the “cowardice” of those disputing his brother’s unbroken membership of the RSS. Corroborating Gopal’s statement is the influential pro-RSS scholar, Koenraad Elst who, in his 2001 book Gandhi and Godse, wrote that “Nathuram contrived to create the impression that the RSS had little to do with him, simply to avoid creating more trouble for the RSS in the difficult post-assassination months.”

Vaidya is forthright to point out his opposition to Gandhi: “Despite disagreeing with him and his surrender to the extremist and jihadi elements among Muslim community RSS had admired (Gandhi)”. This distortion of history is in keeping with the Hindu nationalism espoused by Vaidya and his RSS. While Gandhi opposed Muslim separatists, he wooed over a large section of Muslims to Indian nationalism. To call the Muslims who participated in freedom movement under Gandhi’s leadership “extremist” or “jihadi” is not only a travesty of the truth; it reveals the RSS worldview.

Vaidya tries to show that the RSS was a part of the freedom movement by writing that its founder, K B Hedgewar, participated in the Non Cooperation (1921) and Civil Disobedience (1930) movements. On one hand, Hedgewar participated in the Non Cooperation Movement and on the other, he is critical of its impact of the same: “As a result of non cooperation movement of Mahatma Gandhi, the enthusiasm in the country was cooling down and the evils of social life, which that movement generated, were menacingly raising their head.” According to Hedgewar, “it is due to this movement that Brahmin-non Brahmin conflict was nakedly in view”.

In 1930 (the RSS was formed in 1925), Hedgewar discouraged those who wanted to participate in the anti-British movement. And in 1942, his successor also forbade RSS volunteers to take part in the Quit India movement. M S Golwalkar reminded the RSS that fighting against the British is not a part of their agenda: “We should remember that in our pledge we have talked of freedom of the country through defending religion and culture, there is no mention of departure of British from here.” (Shri Guruji Samagra Darshan, vol. IV, page 40)

As far as Gandhi’s views on the RSS are concerned, there are some scattered observations which give an understanding of what he thought of it. In Harijan on August 9, 1942, Gandhi writes: “I had heard of the Rashtriya Swayamsevak Sangh and its activities; and also know that it was a communal organisation.” Gandhi also refers to the drill of RSS volunteers who shouted that this nation belongs to Hindus alone and once the British leave they will subjugate the non Hindus. In response to the rowdyism indulged in by communal organisations, he writes: “I hear many things about RSS. I have heard it said the Sangh is at the root of all this mischief.”

Amongst the recorded opinions about Gandhi’s evaluation of RSS, the most authentic is the one of his secretary Pyarelal. Pyarelal narrates an event in the wake of 1946 riots. A member of Gandhi’s entourage had praised the efficiency, discipline, courage and capacity for hard work shown by the RSS cadres at Wagah, a major transit camp for Punjab refugees: “Gandhi quipped back, ‘…but don’t forget, so had Hitler’s Nazis and the Fascists under Mussolini’. Gandhi characterised RSS as a communal body with a totalitarian outlook.” (Pyarelal, Mahatma Gandhi: The Last Phase)

HC asks why can’t one be certified an atheist?

Why can’t the state grant a citizen the status of an atheist? The Gujarat high court posed the question to the state government, following a plea by Rajveer Upadhyay, a 35-year-old auto rickshaw driver.

Upadhyay moved the high court in July 2018 after the Ahmedabad district collector declined his request to change his religion from Hinduism to atheist under the anti-conversion laws.

In May 2017 the District Collector refused him permission for this conversion, holding that under the state’s anti-conversion law, “any citizen can change his religion from one religion to other religion, but there is no provision to change the religion as secular (atheist)”.

An HC bench of acting Chief Justice A S Dave and Justice Biren Vaishnav issued notices to the state government and Ahmedabad district collector in response to Upadhyay’s petition.

Upadhyay had submitted that he was born a Hindu in a Garoda Brahmin family, which falls in the scheduled caste category. He claims to have battled caste discrimination all through his life which has prompted him to give up his religion.

Upadhyay has also requested the HC to direct the state government to make amendments to its Freedom of Religion Act, which makes it mandatory for a citizen to obtain permission from the district collector if he/she wants to change his or her religion.

It was submitted that Articles 25 and 26 of the Constitution grant freedom to citizens to profess and propagate any religion or faith. The Gujarat government’s anti-conversion law is thus in violation of constitutional provisions if it restricts a citizen from relinquishing his faith and assuming a secular identity or that of an atheist, Upadhyay submitted.

Upadhyay’s advocate Harsh Shah placed on record the Tamil Nadu government’s decision to issue a certificate to a citizen named M A Sneha, declaring her a “religion-less” person. After issuing notice, the HC posted a further hearing on the subject for July 9.

Source: ‘The Times of India’