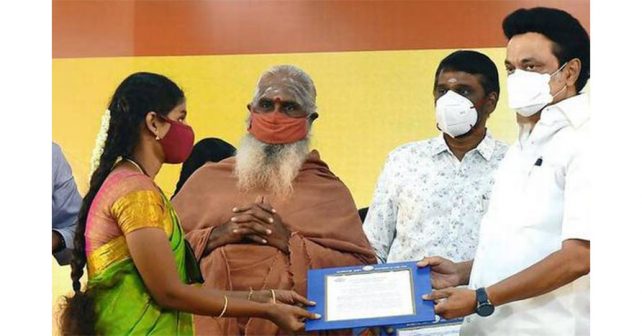 The beginning and the ultimate achievement are as follows in a chronological order:

20.10.1969: Agitation to enter the sanctum sanctorum of Rajagopalsamy Temple in Mannarkudi (Thanjavur district of Tamil Nadu) as per Periyar’s announcement.

02.12.1970: Unanimous support for the enactment of law in Tamil Nadu Legislative Assembly.

03.04.1974: Peaceful agitations all over Tamil Nadu in front of post offices – led by E.V.R. Maniammaiar in Chennai.

08.06.1984: The Government headed by the Chief Minister M.G.R. constituted a commission under Justice N. Krishnasamy Reddiar to train shortlisted people without caste discrimination for appointment as priests in temples.

1984: Following commission’s recommendations the A.I.A.D.M.K. Government announced in the Legislative Assembly that a training school would be started in Palani temple.

09.04.1992: The Chief Minister J. Jayalalithaa announced in the Assembly that training for archakas would be given as per 69 per cent reservation.

01.02.2006: Agitation all over Tamil Nadu with the same demand – ten thousand cadres arrested – Dravidar Kazhagam assured support in State Assembly elections to the party who promises ratification – the DMK offered the assurance.

21.12.2015: Letter sent to C.M. J. Jayalalithaa on behalf of Dravidar Kazhagam – letters to the chief ministers of all the States.

07.10.2017: Asiriyar Dr. K. Veeramani’s  statement demanding enactment of law, on a par with Kerala, for trained people hailing from all castes as temple archakas.

08.09.2018: The rights for all castes – first stage victory celebration in Mannarkudi.

21.08.2018: Special meeting convened at Periyar Thidal,  Chennai. Dr. K. Veeramani delivered a speech – Topic: “The rights of all castes to get appointed as temple archakas: What Next?”