Underscoring the Perils of Majoritarianism 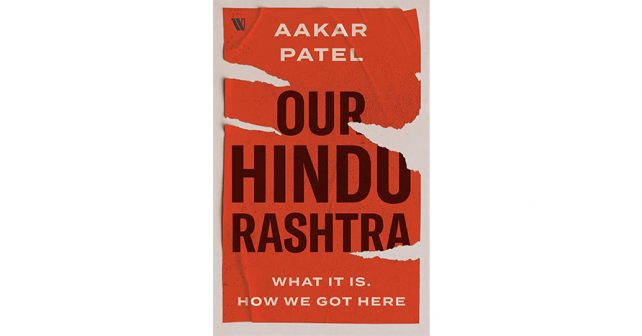 In the present sociopolitical context, it would be trite to state that the challenge of majoritarianism has raised existential questions about the future of secular democracy in India. This challenge can be explicated by analysing the overtly ethnic functioning of the state institutions and vilification and otherisation of minorities in the socio-cultural sphere (Khosla and Vaishnav 2021; Dhawan and Kohli 2020). While the majoritarian clamour for attaining the “Hindu Rashtra” has been led by the so-called fringe right-wing groups in the past, in recent times, this has become shriller and sophisticated. Academic and legal articulations about a new idea of India, the Hindu Rashtra, the civilisational state have sought to grant legitimacy to the naked “democracy capture” that majoritarian politics has accomplished. Against this backdrop, journalist Aakar Patel’s recent book Our Hindu Rashtra: What It Is. How We Got Here provides a cogent response to this phenomenon. Based on his activism and journalism, Patel aims to help readers understand the meaning of “Hindu Rashtra,” its long political and institutional genealogy, and signal how it can still be prevented.

Divided in 14 chapters, the book surveys historical documents, government committee reports, court judgments, media archives, and records personal anecdotes on a range of issues that denude India’s secular credentials. To the credit of the author, he engages with Sangh and its texts with all seriousness and provides a comprehensive outlook of foundational ideologies. Writings on Sangh have oscillated from outright derision to attempts at mainstreaming (unwittingly at times) to hagiography. The book maintains the proportion very well by not falling into any of the three. At the same time, it juxtaposes the vacuity of Hindu majoritarianism with the experience of India’s neighbours, namely Bhutan, Pakistan, Sri Lanka, and Bangladesh.

Chapter 1, on partition history, has many strengths. It agrees with the pantheon of scholarly literature that is epitomised by Ayesha Jalal’s work to seek a fairer apportionment of blame for partition. In other words, it highlights those historic instances where the “strong” Congress assumed an intransigent position and the “weak” Muslim League was left recourse-less. It also includes indictment of M K Gandhi’s overtly religious politics that many Pakistani scholars have high-lighted. However, this narrative is slightly simplistic, and the tone is slightly deterministic even if the point on the use of communal majority by the Congress is well-made. The blame apportionment can never be certain, and it remains a debate that must finally be had. Thus, the alternative narrative and interpretation provided by partition scholars like Ishtiaq Ahmed and Venkat Dhulipala is thus conspicuous by its absence (Ahmed 2020; Dhulipala 2014).

The chapters that follow provide a brilliant elucidation of Sangh’s founding texts, their relevance today for the Bharatiya Janata Party (BJP), and a powerful takedown of their “ideology.” He deftly demonstrates how the dynamics of exclusions and simplifications embedded in this ideology render it empty of content, besides the defence of caste and hatred of Muslims. He demonstrates how ideologies, like integral humanism, have lacked interest in the lived cultures of the sub-continent. Furthermore, he exposes this ideology’s obsession with national and social unity by citing M S Golwalkar’s viscerally hateful statements against India’s social minorities. He further shows how this empty ideological agenda is politically furthered with sheer shrewdness and caprice that enabled the political formations like the BJP to respond and adopt to dominant currents of day. This marks the evolution of BJP/Jan Sangh’s approach towards Muslims from passive aggressive (in Jan Sangh era) to aggressive but apologetic (under L K Advani) to unapologetic (under Narendra Modi).

Chapters 2 and 3 provide relevant historical background for birth of religious majoritarianism in Pakistan. The analysis and interpretation of Pakistan’s constitution-making process provide rich insights into tie regressions of M A Jinnah’s Islamic Republic towards the legal disenfranchisement of religious minorities through conservative Islamic polities. The analysis of this majoritarian gaslighting of members of religious minorities is instructive for understanding the state of Pakistan today.

For instance, the fate of minorities’ amendments to blatantly Islamic incantations and imagery in the objective resolution bring to light that constitution-making in the postcolonial sub-continental state was not a consociational exercise but the enactment of the “tyrannical” will of the majority. It explicates the steep fall of secular moralism and minority vanguardism by Islam’s high priests.

While it does not mirror what happened in Delhi, it has striking similarities to the “containment” of minority rights after partition (Gauba 2016). In a similar vein, Chapter 7 on the debates in the Indian Constituent Assembly about the controversial issue of conversions provide imperative perspectives to under-stand the effective criminalisation of religious conversion in the BJP-ruled states (Karwa and Dhawan 2020). He notes the statement of the Constituent Assembly member Loknath Misra, who “opined that Hindus had already obliged Indian minorities by not declaring India a Hindu State. In his words, by choosing secularism, the `maximum of generosity’ that a ‘Hindu-dominated territory’ could give its minorities was given. This generosity was being abused by ‘making propagation a Fundamental Right,’ said Misra, asking that Hinduism ‘be given a fair deal, if not restored to its legitimate place after a thousand years of suppression.”

This critique of political and religious majoritarianism being translated into law extends to Patel’s analysis of the triple talaq question (in Chapter 11) and the cattle slaughter laws (in Chapter 13). These chapters provide a relevant repertoire of the translation of brutal majoritarianism into the legal order and highlight the tyranny of targeted over-criminalisation and incarceration.

The real-life impact of these tyrannical laws is brought out in the chapter on “Apartheid Ahmedabad” where Patel draws on his vast journalistic reportage on the post-Godhra ghettoisation in Gujarat. He shows how the state mandates separation and ghettoisation through legal prohibitions against the sale of property to Muslims by the application of the controversial Disturbed Areas Act to vast parts of the state. Beyond the strident political and intellectual critique of legal majoritarianism, Patel expresses his personal pain as an inheritor of the cosmopolitan and composite Gujarati identity. This pain at the loss of Gujarat’s syncretism and cultural pluralism is expressed eloquently in Chapter ten where he mentions his failed attempt to seek reconstruction of Sufi saint Wali Dakhani’s mazar in Ahmedabad.

Chapter 6 ably demonstrates the myth of Muslim appeasement and brings out the pertinent observations of the Sachar Committee report regarding the marginalisation, under-representation, and backwardness of Muslims in the public life as well as formal employment. The emphasis on the challenges of Dalit Muslims and Other Backward Classes to access reservation notwithstanding, the chapter is deficiently critical of the United Progressive Alliance’s approach towards the implementation of the Sachar Committee report. Reference to scholarly works on that question could have enriched this discussion on this issue (Kim 2019; Islam 2019). Nevertheless, his discussion ably establishes the irrationality of exclusion of religious converts belonging to lower and back-ward castes from seeking social justice benefits. This raises questions about the framework of affirmative action policies and jurisprudence.

Patel’s project is distinctive for its courageous take down of patently unreasonable and biased court opinions. In Chapter 9, he discussed the Supreme Court’s deficient and compromised position on secularism. While this critique has become clearer after the Court’s inaction on various human rights violations in recent times and its judgment on the Ayodhya issue, his contribution to the critique is in providing a genealogy of the judicial complicity in Hindu majoritarianism (Tew 2018). His discussion focuses on the various cases relating to the use of religion and its symbols in political campaigns. He critiques the, Court for “[holding) forth on technology, and [defining] Hindutva not as the exclusionary ideology that Hindutva’s inventors and adherents say it is. but as a benign ‘way of life.” He further questions the Hindu exceptionalism and double-standards in these judgments by observing, “this idea that religion could not be associated with any specific symbols was true, according to the Supreme Court, only for Hinduism. The court said its observation could not apply to other faiths: “If they are told that they should cast their vote for a particular candidate whose election symbol is associated with a particular religion just as the cross is with Christianity, that will be using a religious symbol for obtaining votes.” But, “in the case of the Hindu religion, it is not possible to associate a particular symbol with religion, the use of a symbol even when it is associated with some deity. cannot without something more, be regarded as a corrupt practice within the meaning of the Act.”

In the final analysis, this book provides a great understanding of how we got here by honestly identifying the presence of a lurking majoritarianism in the Indian polity. There is increasing acknowledgement of the reality that “liberal-democratic constitutionalism in India, in other words, has been living on borrowed time.” This breakdown of the grand liberal vision has underscored the pertinence of a popular reclamation and radical political rethinking of the ideas and practices from which constitutional and institutional orders ultimately emerge” (Khosla and Vaishnav 2021). If the Indian Constitution’s protection has to become a matter of popular struggle and democratic politics, patel’s work is crucial as it avoids constitutional idolatry and engages in truth talking.

However, the exploration of how the distinctive malevolence of the present moment came to be is a noticeable omission. The book does go beyond the “contempt” for Hindutva, something that became a credo of the post-1991 secular politics. However, the attempts to scratch the surface of Hindu prejudice and hegemony do not lend themselves to analysis that aids social theory. The idea that Hindutva is a primitive idea has definitely been junked, and its wide popular appeal and institutional buy-in has been exposed. However, the lack of emphasis on counter-hegemonic strategies that invert the idea of nationalism, challenge the monopoly over Hinduism, and rethink the future of religion in the public sphere have not been touched upon.

Nevertheless, the book alerts one to the urgency of crafting a new political constitutionalism that acknowledges the founding dilemmas and limitations to the achievement of democracy of the rule of law at the social level. Thus, the elite tendency to ignore social relations and reforms would have to be abandoned in the favour of strident attempts to nurture fraternity without which, to quote B R Ambedkar, “equality and liberty do not become the natural course of things.” How does this fraternity emerge from on the ongoing popular resistance against the hegemonic power is something that remains unexplored.