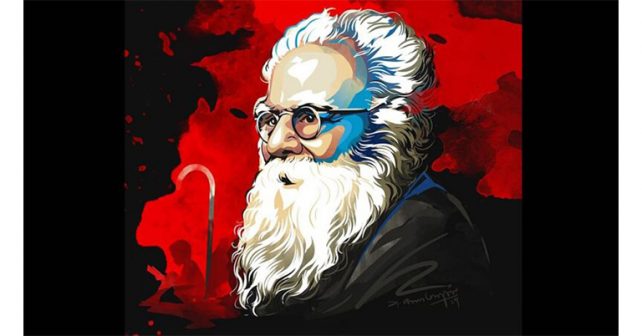 (A speech delivered by Thanthai Periyar on 15.11.1953 at Washermenpet in Madras, voicing his protest against Kula Kalvi (caste wise occupation scheme) imposed by Rajagopalachari. Ironically, it was like the New Education Policy(NEP) framed recently by the Union Government)

My dear Comrades and Cadres, today I wish to discuss with you Kula Kalvi (caste wise occupation scheme) imposed by my friend Rajagopalachari, which has added fuel to the already scorching fire in our society. This Gurukulam system of education to sustain the practice of caste wise occupation would severely hamper the future of our children if we do not nip it in the bud.
Drastic Change
Upon assuming the post of the chief minister Rajagopalachari repealed food control scheme which had long been causing annoyance to the public. We lauded the truly beneficial measure of welfare. People too heaved a sigh of relief when the control was thrown overboard. Besides, he granted some relief offers to weavers too. But when he had earned enough trust of the people and safeguarded his coveted post, there was a drastic change in him.

To bind this country with the shackles of Manudharma he started the preliminary tasks. He commenced them with brahminist dominance in employment and placement.
Our Dravidian people could not even think of jobs in any field or industry. All the vacant posts were filled with brahmin applicants who had no integrity or morale. He did not stop with mere brahminist monopoly in employment. He went a step ahead to hinder the educational progress of Sudras inorder to prevent them from seeking placements and posts on the grounds of their qualification and eligibility.

” When we ask them why we alone must go on doing our hereditary works and watch Brahmins advancing in life acquiring education, employment, posts, positions and power, we are abused as sectarians and silenced by that single word. This injustice is all around us as government, freedom, democracy, and republic. This injustice exists in the form of belief in god, theism, Ramayan, Mahabharat, Gita and religion. Our protest against such atrocities are labeled hate speeches and racial prejudice. We are accused as anti nationals and also called atheists, for raising voice against social injustice.”

Protests ignored
As the ground work for this obstacle, he has now thrust in a new scheme of elementary education which is clearly an effort towards reestablishing the varnashrama. There is widespread protest against this heredity based scheme but Rajagopalachari has not taken any protest seriously. The rulers who say that their governance is democratic should pay heed to the protests, shouldn’t they?
The first voice of protest was mine. I made people realize that the new scheme of education is indubitably a varnashrama education scheme. I stressed on nipping it in the bud. People too extended their whole hearted support to me. Infact many of the opposition parties joined my protest. Surprisingly, many Congress insiders too opposed this unwarranted scheme. My protest was strengthened by several city municipalities, village panchayat boards, teaching faculty and eminent academicians. The revival of varnashrama was thus rejected vehemently. But the people ruling as democrats turned a blind eye to the widespread protests.

Obstinacy
Rajagopalachari adamantly clung to the scheme and yelled that he cared too hoots. He insisted on its implementation and declared that he had no second thoughts about it. He threatened that the scheme would be followed this year in villages but would be extended next year to all the cities. Is this justice? Can this be called democratic rule? Our protest falls on the deaf ears of some people who call us ungrateful. They blame us for finding fault with Rajagopalachari who has introduced, according to them, a noble scheme.
Dear comrades, if you analyse properly you would find this scheme to be an attempt to reestablish varnashrama and conserve it. As per this scheme, the children in each class has to be learners in class rooms only in the forenoon and involve themselves in their hereditary work in the afternoon and acquire much more skill by practice. We sudras are condemned to toil manually. Hence, a barber’s son has to dress hair; a washerman’s son has to wash dirty linen; a potter’s son has to work on clay mounds; and a cowherd’s son has to learn cattle grazing as per their own heredity.|

Voice Stifled
It would be fair in a sense if brahmin students also involve themselves in works according to their heredity, but they cleverly avoid it. The unwritten law is to bind only us. They demand jobs, posts and positions for themselves and so full time learning activity is claimed by them. Social justice is thrown overboard.
When we ask them why we alone must go on doing our hereditary works and watch Brahmins advancing in life acquiring education, employment, posts, positions and power, we are abused as sectarians and silenced by that single word. This injustice is all around us as government, freedom, democracy, and republic. This injustice exists in the form of belief in god, theism, Ramayan, Mahabharat, Gita and religion. Our protest against such atrocities are labeled hate speeches and racial prejudice. We are accused as anti nationals and also called atheists, for raising voice against social injustice.

Nothing personal
This is the sorry state of State affairs today. Comrades listening to me here must realize in what a deplorable condition our Government and its rule are. Is it fair? And yet, I reiterate that I have no personal vendetta to settle score with Rajagopalachari.
I do not have any sort of grudge against him. There is no animosity between us and I do not envy him over anything. There may be some who nourish such feelings towards him but certainly not me. He is till this moment a good friend of mine inspite of all our issue-based fights. If he demits his post as the chief minister at some point of time in future, he would certainly drop into my house and I would also garland him and welcome. Hence, rest assured my dear comrades, there is no ill-will or personal contempt and intentional bitterness embedded in my speech today.

I urge thus upon everyone who has been stigmatised as a lower caste individual – prepare yourself for a resolute revolution. Question yourself who caused this disgrace. If you feel it was an act of the so called god, smash such a god into pieces. If it seems to be a religious command, ruin it completely. In case it is found to be a ploy of the governing rulers, annihilate their governance. If you realise that it is the strategy of some avaricious elements, face them boldly and tell that their prevarication would never ever succeed.
Thanthai Periyar, in Kudi Arasu dated 4th December 1932

Their rise and our fall
Rajagopalachari is striving for the welfare of his brahmin race, knowing very well that there is widespread contempt all over the country against it. He is bent upon crushing the growing hatred. His objective is to protect his race by stifling our voice. His strife is indeed vigorous just as ours is. We are likewise struggling to safeguard our race. His brahmin race can flourish and prosper only by our enslavement and degradation. He knows very well that the well being and growth of his race depends on our getting annihilated.
Though in issue-based fights he is our opponent, for the people of his race he is a great savior and one who was born for their prosperity in life. We do not deny the fact that he is on the direction which is right from his point of view.

No retreat
We have to march ahead towards achieving our objective, which is eradicating our degradation, erasing the stigma on us and abolishing our servitude. This is our only motive behind demanding the exit of Brahmins. We want them to quit since on it lies our advancement in life.