Ushering in Periyarism into Academies 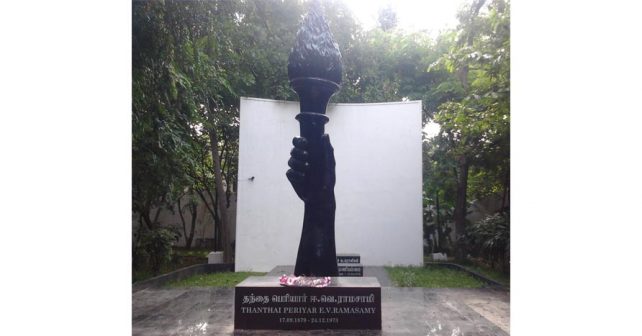 Periyar is no longer an apartheid and a day is not far off for the advent of his ideals into Academies. Invincible efforts of Dr.Veeramani in taking Periyar nationally and internationally should not go in vain. As on date, Periyar is fairly popular among the intelligentsia of the South East Asian countries, the USA and the UK. As a guest he had been in Russia for weeks together in the thirties of the last century. The citation of the UNESCO Manram has celebrated him as the Socrates of the South East Asia. In the South of India, nay, in the whole of this sub-continent, no social reformer has been humiliated, insulted, abused and condemned as much as Periyar has been.

Issues such as widow remarriage, non-Brahmin archakas, women’s education, communal reservation, worship in Tamil, abolition of caste system and child marriages which he demanded insistently much against the die-hard opposition have become the Statute Laws of the country. Periyarism is echoing in various corners of India, very much to the chagrin of the crumbling orthodoxies.

In the socio-political map of India, the image of Periyar is held high and has become the cynosure of the whole nation. Such being the case, is it not proper to expect his voice to be heard in the Academies? When Vivekananda, Raja Rammohan Roy, Guru Nanak and Narayana Guru have gained entry into the Academics, why not Periyar? Before long, it has to be made a reality.

After the gloomy interregnum of about a decade, the rising sun has been sparkling from the horizon. The opportune moment is timely to usher in Periyar. When the teenagers of to-day get immersed and are swept away by the evil side of Internet, Periyar’s ideals, his supreme sacrifice and service to the society are bound to bring them ashore. Mechanism of gaining entry to Periyarism will no longer be acutely problematic. Let us learn Periyarism is an ideal work to serve this purpose. Both the Tamil and English versions may have to be edited afresh to keep certain harsh information and bitter truths in abeyance. The positive side of all that Periyar has done, may be highlighted. This is to keep at bay the inimical elements.

There are 37 universities and 566 arts and science colleges in Tamil Nadu of which 193 colleges are autonomous. These institutions have got Boards of Studies separately for under-graduate and post-graduate classes for each subject. The commendation of these Boards are customarily okayed by the Universities and in the case of autonomous colleges, they themselves decide with the help of their intra-mural bodies. Not necessarily in all these academic institutions we have to aim. Among those that are amenable to us, we can step in with the academic – oriented revised editions.

Periyarism in textual prescription can get along with subjects such as philosophy, Tamil, English, history, politics and sociology. To ward off the likely criticism, if Kazhagam publishes the book, it can be handed over to a like – minded private publisher to get things done. If such efforts are carried through, the resultant effect will definitely be rich and rewarding.