Was it fair on the part of the CBI – Scaling the Wall and Arresting the Former Union Finance Minister and the Home Minister, Mr. P. Chidambaram? 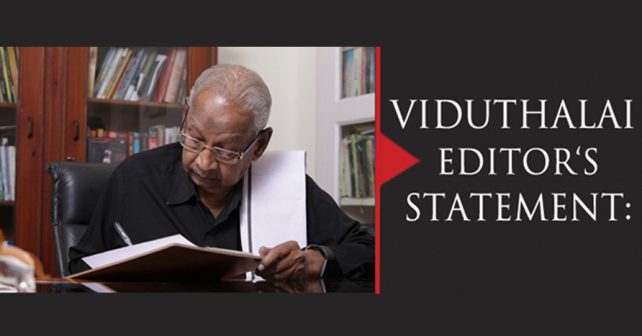 Dravidar Kazhagam President, Asiriyar Dr. K. Veeramani has raised a question whether it was fair on the part of the CBI officials who scaled the six feet boundary wall and arrested P. Chidambaram as if he is an extremist.  Condemning this approach he has presented a statement as follows:

Through the CBI the BJP Government has filed a case against Senior Advocate Mr. P. Chidambaram, who is one of the leading members of the All India Congress Committee and the former Home Minister at the Centre as well as the former Minister of Finance and also the present day’s leading critic among the members of the Opposition in the Parliament.

In connection with some cases in the past, he used to attend enquiries.  Staying his arrest, the enquiries were carried on granting time on several occasions.

In one particular case the Supreme Court rejected his request for anticipatory bail.  The day before yesterday, he submitted through his lawyer, an appeal for reconsideration.  This was not taken up for immediate enquiry by the Supreme Court.  It is now expected to be done on Friday.  When there is one day left for the said enquiry, a bill was pasted on the wall of his house proclaiming that he is an absconding criminal wanted by the CBI.

He was neither absconding nor hiding anywhere.  He let out his statement that he had been discussing further legal steps with his lawyers and that he respects the law.  Upon his returning home, the CBI barged into his house and arrested him.

Though the CBI officials have the responsibility of performing their duty, scaling the wall of his house at night and treating him as if he is an extremist, terrorist and an antisocial element, cannot be accepted by the neutral persons and believers in democracy.

Under the pretext of performing duty as per law, vendetta-spree, political vengeance and envy have been clearly revealed which is quite unjust.

This seems to have happened not to threaten only him.  It is a threat to all persons who criticize the principles and plans of the Government.

People who respect democracy and the decorum of political laws would never tolerate this.  Democratic freedom of speech, thought and action should not be stifled.

It is certain that Mr. P. Chidambaram would take further legal steps appropriately and tackle this problem.