Why did the Brahmins become vegetarian? 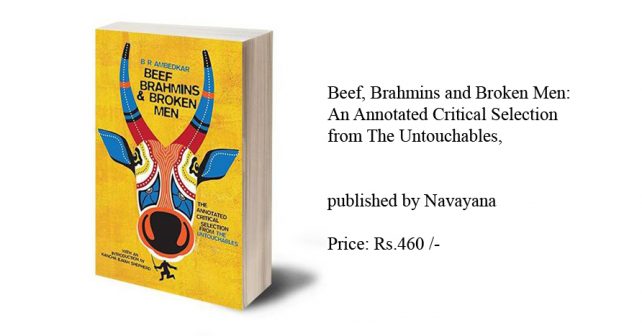 It was to get one step ahead of the Buddhists that the Brahmins gave up beef-eating, says B.R. Ambedkar. An extract from a new edition of a book Babasaheb wrote in 1948

B.R. Ambedkar’s 1948 work The Untouchables: Who Were They and Why They Became Untouchables? has been re-issued as Beef, Brahmins and Broken Men: An Annotated Critical Selection from The Untouchables, published by Navayana with an Introduction by Kancha Ilaiah Shepherd. This excerpt is from the chapter that deals with the conflict between Brahmanism and Buddhism and how it led to the Brahmins first giving up eating beef, and then turning vegetarian.

For generations the Brahmins had been eating beef. Why did they give up beef-eating? Why did they, as an extreme step, give up meat eating altogether and become vegetarians? It is two revolutions rolled into one. As has been shown it has not been done as a result of the preachings of Manu, their Divine Law-maker. The revolution has taken place in spite of Manu and contrary to his directions. What made the Brahmins take this step? Was philosophy responsible for it? Or was it dictated by strategy? Two explanations are offered. One explanation is that this deification of the cow was a manifestation of the Advaita philosophy that one supreme entity pervaded the whole universe, that on that account all life, human as well as animal, was sacred. This explanation is obviously unsatisfactory. In the first place, it does not fit in with facts. The Vedanta Sutra which proclaims the doctrine of oneness of life does not prohibit the killing of animals for sacrificial purposes as is evident from II.1.28. In the second place, if the transformation was due to the desire to realize the ideal of Advaita then there is no reason why it should have stopped with the cow. It should have extended to all other animals.

Another explanation more ingenious than the first, is that this transformation in the life of the Brahmin was due to the rise of the doctrine of the Transmigration of the Soul. Even this explanation does not fit in with facts. The Brahadaranyaka Upanishad upholds the doctrine of transmigration (VI.2) and yet recommends that if a man desires to have a learned son born to him he should prepare a mass of the flesh of the bull or ox or of other flesh with rice and ghee. Again, how is it that this doctrine which is propounded in the Upanishads did not have any effect on the Brahmins up to the time of the Manusmriti, a period of at least 400 years. Obviously, this explanation is no explanation. Thirdly, if Brahmins became vegetarians by reason of the doctrine of transmigration of the soul how is it that it did not make the non-Brahmins take to vegetarianism?

To my mind, it was strategy which made the Brahmins give up beef-eating and start worshipping the cow. The clue to the worship of the cow is to be found in the struggle between Buddhism and Brahmanism and the means adopted by Brahmanism to establish its supremacy over Buddhism. The strife between Buddhism and Brahmanism is a crucial fact in Indian history. Without the realization of this fact, it is impossible to explain some of the features of Hinduism. Unfortunately, students of Indian history have entirely missed the importance of this strife. They knew there was Brahmanism. But they seem to be entirely unaware of the struggle for supremacy in which these creeds were engaged and that their struggle which extended for 400 years has left some indelible marks on religion, society and politics of India.

This is not the place for describing the full story of the struggle. All one can do is to mention a few salient points. Buddhism was at one time the religion of the majority of the people of India. It continued to be the religion of the masses for hundreds of years. It attacked Brahmanism on all sides as no religion had done before.

Brahmanism was on the wane and if not on the wane, it was certainly on the defensive. As a result of the spread of Buddhism, the Brahmins had lost all power and prestige at the Royal Court and among the people. They were smarting under the defeat they had suffered at the hands of Buddhism and were making all possible efforts to regain their power and prestige. Buddhism had made so deep an impression on the minds of the masses and had taken such a hold of them that it was absolutely impossible for the Brahmins to fight the Buddhists except by accepting their ways and means and practising the Buddhist creed in its extreme form. After the death of Buddha his followers started setting up the images of the Buddha and building stupas. The Brahmins followed it. They, in their turn, built temples and installed in them images of Shiva, Vishnu and Ram and Krishna etc.— all with the object of drawing away the crowd that was attracted by the image worship of Buddha. That is how temples and images which had no place in Brahmanism came into Hinduism. The Buddhists rejected the Brahmanic religion which consisted of yajna and animal sacrifice, particularly of the cow. The objection to the sacrifice of the cow had taken a strong hold of the minds of the masses especially as they were an agricultural population and the cow was a very useful animal. The Brahmins in all probability had come to be hated as the killer of cows in the same way as the guest had come to be hated as Goghna, the killer of the cow by the householder, because whenever he came a cow had to be killed in his honour. That being the case, the Brahmins could do nothing to improve their position against the Buddhists except by giving up the Yajna as a form of worship and the sacrifice of the cow.

That the object of the Brahmins in giving up beef-eating was to snatch away from the Buddhist Bhikshus the supremacy they had acquired is evidenced by the adoption of vegetarianism by Brahmins. Why did the Brahmins become vegetarian? The answer is that without becoming vegetarian the Brahmins could not have recovered the ground they had lost to their rival namely Buddhism… That in an agricultural population there should be respect for Buddhism and revulsion against Brahmanism which involved slaughter of animals including cows and bullocks is only natural. What could the Brahmins do to recover the lost ground? To go one better than the Buddhist Bhikshus not only to give up meat-eating but to become vegetarians — which they did. That this was the object of the Brahmins in becoming vegetarians can be proved in various ways.

If the Brahmins had acted from conviction that animal sacrifice was bad, all that was necessary for them to do was to give up killing animals for sacrifice… That they did go in for vegetarianism makes it obvious that their motive was far-reaching. Secondly, it was unnecessary for them to become vegetarians. For the Buddhist Bhikshus were not vegetarians. This statement might surprise many people owing to the popular belief that the connection between Ahimsa and Buddhism was immediate and essential… This is an error. The fact is that the Buddhist Bhikshus were permitted to eat three kinds of flesh that were deemed pure…

As the Buddhist Bhikshus did eat meat the Brahmins had no reason to give it up. Why then did the Brahmins give up meat-eating and become vegetarians?

…The giving up of the yajna system and abandonment of the sacrifice of the cow could have had only a limited effect. At the most it would have put the Brahmins on the same footing as the Buddhists. The same would have been the case if they had followed the rules observed by the Buddhist Bhikshus in the matter of meat-eating. It could not have given the Brahmins the means of achieving supremacy over the Buddhists which was their ambition. They wanted to oust the Buddhists from the place of honour and respect which they had acquired in the minds of the masses by their opposition to the killing of the cow for sacrificial purposes. To achieve their purpose the Brahmins had to adopt the usual tactics of a reckless adventurer. It is to beat extremism by extremism. It is the strategy which all rightists use to overcome the leftists. The only way to beat the Buddhists was to go a step further and be vegetarians.