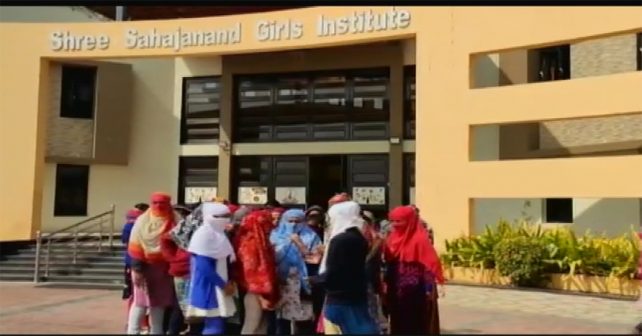 India respects women as the custodians of society. A State in this nation has now belittled the entire womenfolk in a bizarre manner.

Shree Sahajanand Girls Institute (SSGI) has been functioning for the past eight years at a town called Bhuj in the State of Gujarat. Nearly 1500 girls are studying in this institution, including 68 hosteliers hailing from the villages in the vicinity of Bhuj. Girls entering the kitchen during their menstrual period is prohibited by the management. There is also a taboo on their entering the temple on the campus for worship during those days. The principal of the institute Ms. Rita Raninga had been receiving complaints from the hostel warden that these rules are being violated by the hosteliers. The action taken by the principal is undeniably nauseating!

She had made all the 68 girls assemble and conducted a physical check-up. Two of them had admitted they were then enduring their period. The rest of them had stood aside. The unconvinced principal had dragged them to the wash-room and forced them to strip and prove. This horrible incident stormed the entire campus, leading the vice-chancellor in charge to form an enquiry commission. Widespread protest from the parents and the public followed demanding stern action against the management.

It is ironical that the disrobing of female students has been done by a woman. Those helpless girls could not scream – “How dare you!” Walls are built in Ahmedabad to conceal filth. Who is to build walls to conceal all those humiliated girls? And we would be celebrating Women’s Day shortly – even after this shameful incident!

At this juncture, a Godman named Swami Krishnaswarup Das who dwells in Swaminarayan Bhuj Mandir (Temple) has proclaimed through his twitter message (20th February, 2020) – as follows:

“If men eat food prepared by a menstruating woman even once, they will be    born as Oxen in their next birth. A menstruating woman who cooks food for her husband will certainly be reborn as a Kutri (bitch-a female dog)!” Besides torturing and humiliating female students by forcing them to strip for a physical check-up, this controversial institute run by the followers of religious sect has added fuel to the fire!

This charlatan Godman believes that women should observe austerity during menstruation. The mask of Hundutva is unveiled once again exposing its biased views against women. It is noteworthy that the State concerned is under the rule of the Sangh Parivar coterie – the BJP!

These derogatory maxims from the so called Godman during his religious discourse in the temple (Bhuj mandir) expose the misogynistic mindset of these religious fanatics. It is an unabashed effort to normalise misogyny! It is really disgusting that our country has been tolerating the existence of such fake Godmen who are unadulterated hypocrites.

We have to wait and see how the entire womenfolk of our nation are going to react over this unpardonable incident. Infact, women should come to the fore front in banishing Hindutva. Forgiving all these religious fanatics would only make us hang our heads in shame!