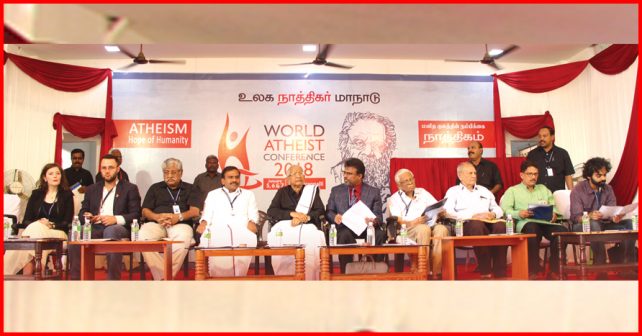 We, the atheists, humanists, rationalists, freethinkers and like-minded people, from India and abroad, gathered here in Trichy, Tamil Nadu, on the eve of the World Atheist Conference 2018, organized by DravidarKazhagam, Atheist Centre and The Rationalists’ Forum on January 5, 6 & 7, 2018.

We have identified that:

•    Children and Youth are the majority in the world and there is a need to liberate them from ignorance, illiteracy and superstitions, by educating them in critical thinking and free inquiry so that they develop scientific temper and lead a rational and ethical living
We are deeply concerned:

•    We are concerned with the growing intolerance, persecution and violence against atheists, humanists and rationalists

•    We are concerned with the superstitious practices and fraudulent ‘god-men’, their impact on the health and well-being of children, women and the society.
We affirm:

•    We stand for equality and rights of women, children, and LGBT people, and all have the equal right to life and free from discrimination

•    We stand for secularism and free thought

•    We assert that atheists, humanists, rationalists, freethinkers and non-believers have equal rights as  with everyone else and the Governments should be cognizant of these

•    We are committed to build atheism and humanism as a way of life, along with  critical thinking, scientific temper and spirit of inquiry

•    We uphold the human dignity and self-respect of all people

•    Blasphemy laws throughout the world, should be abolished

We recognize the efforts of atheist, rationalist and humanist social reformers and we will be carrying forward their work for a rational and empathetic society.

Today, on January 7, 2018, this declaration stands as our voice for justice, equality, scientific temper and spirit of inquiry.